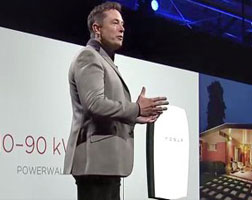 Australia’s electricity industry is about to undergo a massive transformation, with the advent of cheap storage batteries for solar energy.

US billionaire Elon Musk, a co-founder of PayPal, this month launched a lithium-ion battery called the Powerwall that is expected to sell in Australia next year for about US$5,500.

It was developed alongside his revolutionary Tesla electric car, launched late last year.

“You can actually go, if you want, completely off-grid,” Mr Musk said of the batteries.

“You can take your solar panels, charge the battery packs and that’s all you use.”

“They come coupled with solar PV (photo-voltaic panels) that really enable consumers now to become their own new power stations.”

Australia is expected to be one of the Powerwall’s biggest markets due to the high take-up of residential solar PV rooftop panels.

“It will happen quicker in Australia than it will happen anywhere else in the world because of the high retail prices,” he told 7.30.

“We pay so much just to boil a kettle in the city and now we have a cheaper way of doing it.

“It’s going to be about as big a change as we’ve seen in the telecommunications industry with mobile phones.”

Some of Australia’s biggest power companies are already scrambling to catch up.

AGL, owner of Victoria’s brown coal generator Loy Yang — the country’s biggest emitter of greenhouse gases — has just announced it will begin marketing its own battery package within weeks.

The company will be engaging with consumers in a multitude of ways “in the grid, off the grid, behind the meter, in homes and businesses”, according to AGL new energy general manager Marc England.

Parkinson said the company was recognising the new technology was going to be “the biggest change in their industry in more than a century”.

“So they are trying to engage with the consumer and protect their business,” he said.

In Townsville, Ergon Energy has already begun trials of solar battery combinations with 10 of its customers, and has begun rolling out a program of localised grids powered with major battery units into 12 remote communities across Northern Queensland.

Barry and Glenys Lowe’s house is part of the Townsville trial, and they are even selling power back into the grid.

“And there’s been some surplus money out of it.”

Ergon’s emerging markets manager Glenn Waldon described the low price of the Powerwall as a “step change” for the industry.

He predicts Australian energy companies will soon be offering their customers packages similar to the package bundles offered by mobile phone companies.

“Instead of just buying kilowatt hours, you’ll be getting different product wraps and mixes — so capped price options, somewhat like telco or offerings for mobile phone plans,” he told 7.30. – ABC.net.au