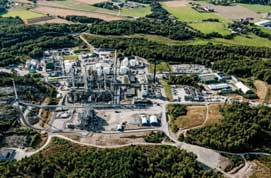 Chemicals firm Perstorp says it has developed a production concept to produce methanol from a large variety of recovered end-of-life streams and hydrogen from electrolysis. Calling it Project AIR, the firm will build a large-scale, commercial carbon capture and utilisation (CCU) unit in Stenungsund, Sweden, to produce sustainable methanol by 2025. It adds that the methanol plant will be unique at it is a combined CCU and gasification process where CO2, residue streams, renewable hydrogen and biomethane will be converted to methanol. Perstorp plans to do this in cooperation with Fortum, Uniper and Nature Energy.

Methanol is one of the most important raw materials for the chemical industry. Project AIR aims to substitute all the 200,000 tonnes of fossil methanol that Perstorp uses annually in Europe as a raw material for chemical products. The project would support companies downstream in the value chains in their efforts towards renewable/circular materials, reduced carbon footprints, and in their ability to offer sustainable, affordable products. If completed, Project AIR will reduce greenhouse gas emissions by about 500,000 tonnes/year. The goal is to start producing sustainable methanol in 2025.


If the required funding’s are granted, Perstorp plans to build the methanol plant, utilise own CO2 and residue streams, and use the methanol to substitute all the fossil methanol used in its production in Europe. Fortum and Uniper plans to supply renewable hydrogen from a new electrolysis plant. One of the world’s largest producers of biogas, Nature Energy will seek to supply biogas to Project AIR.

“This innovation would both optimise the use of existing technologies whilst building something completely new, as well as demonstrating carbon capture and utilisation, using captured CO2 as a raw material. It would be a concrete example of the transition towards a circular economy and of how significant CO2 emission reductions could be achieved by utilising existing resources and closing loops. This would be an important step for us to achieve our goal of becoming Finite Material Neutral,” said Perstorp’s President/CEO Jan Secher.