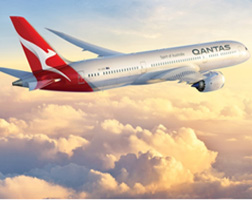 Australian flight company Qantas will mark a world’s first when it launches a biofuel-operated flight early next year.

The Boeing 787-9, which will fly from Australia to Los Angeles, will use 70 % jet fuel and 30 % bio fuel made from mustard kernels.

The history-making flight will take place thanks to a partnership with Agrisoma Biosciences, a Canadian-based agricultural and technology company.

Qantas International CEO, Alison Webster, said in a press release about the landmark event that this is a step towards developing increased biofuel supply and use in Australia.

“We are constantly looking for ways to reduce carbon emissions across our operations but when it comes to using renewable jet fuel, until now, there has not been a locally grown option at the scale we need to power our fleet,” Webster said.

Not only is it an opportunity to curtail pollution, but it also provides partnership and agriculture opportunities for Australian farmers, Webster added.

“Our work with Agrisoma will enable Australian farmers to start growing today for the country’s biofuel needs of the future.

“The trans-Pacific biofuel flight is a demonstration of what can be achieved locally.

“The longer-term strategic goal of the partnership is to grow 400,000 hectares of carinata which would yield over 200 million litres of bio-jet fuel each year.”

Fuel is one of Qantas’ biggest expenses with it accounting for at least a third of the airline’s overall costs.

“Our commercial operations in the USA, South American and Europe are certified as producing fuels with more than 80 % reduction in carbon emissions in comparison to standard petroleum based fuel,” Agrisoma CEO, Steve Fabijanski, said.