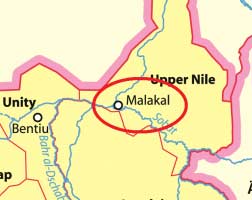 Rebels in South Sudan recaptured the oil-pumping hub of Malakal, a setback to the embattled government’s effort to regain control of the top industry in a country slipping deep into economic and humanitarian crisis.

Government troops were trying to reclaim Malakal from the north on Monday, said rebel spokesman James Gatdek Dak. South Sudan’s weak government, at war with a rival faction since late 2013, reclaimed the hub for the country’s only active oil fields just two months ago.

With Malakal again in rebel hands, a conflict that has already killed more than 50,000 people and sent nearly two million fleeing their homes looks set to deepen.

The conflict was triggered by a power struggle between President Salva Kiir and his former deputy, Riek Machar. More than a year of peace talks have gone nowhere, prompting the U.S. and European Union to impose sanctions on several commanders from both sides.

The most recent clashes have raged even as Messrs. Kiir and Machar held direct talks on the peace process in the Kenyan capital, Nairobi.

South Sudan’s oil regions have seen the heaviest combat, as factions seek to gain control of the country’s strategic assets. One whole state has stopped producing oil, while output in the Upper Nile state around Malakal has dropped to 160,000 barrels a day from 220,000 before fighting started in December 2013.

The fighting has forced many farmers to abandon their fields and hampered aid deliveries to displaced civilians. Nearly a third of South Sudan’s 11 million people face a food crisis, the United Nations said.

The U.S.-funded Famine Early Warning Systems Network on Monday said prices of sorghum increased as much as 90% between March and May in Juba, putting the country’s main staple out of reach for the majority of the population.