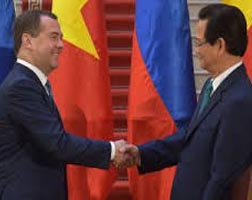 The Russian oil company Gazprom Neft has tentatively agreed to buy a 49 % share of Vietnam’s only oil refinery and to join with PetroVietnam in exploring for and developing oil and gas resources beneath the Pechora Sea in the Russian Arctic.

The tentative agreements were signed in Hanoi on April 6 and witnessed by Russian Prime Minister Dmitry Medvedev and Nguyen Tan Dung, Vietnam’s premier. Gazprom Neft said in a statement that the contracts are expected to be made binding by October 31.

“The projects will be implemented via joint ventures of Gazprom Neft and PetroVietnam, in which the stakes of each party will be negotiated,” the Russian company said. Medvedev said bilateral operations can likely begin in 2016, but neither side disclosed any of the deals’ financial details.

Russia and Vietnam have long had a close relationship. Not only was Moscow Hanoi’s chief ally during the Vietnam War of the 1960s and early 1970s, it also has been an energy partner since the 1980s, when Russia helped Vietnam build hydroelectric plants. Later the two countries entered into a joint venture on oil and gas called Vietsovpetro, and Moscow helped Hanoi develop nuclear power plants.

In the deal outlined on April 6, Gazprom Neft said it alone had the right to negotiate with PetroVietnam on buying 49 % of the stock in Binh Son Refining and Petrochemical Co., which operates Vietnam’s Dung Quat refinery. Under Vietnamese law, no foreign entity can own more than 49 % of a Vietnamese company.

Dung Quat now refines about 48 million barrels of oil a year, about 30 % of the oil products consumed in Vietnam. By 2022, however, with Russian help, the facility will be upgraded to increase its refining capacity.

There’s an incredible energy development we’ve been keeping track of for you over the past year… It’s the reason Saudi Arabia is acting in desperation… depressing oil prices… and even risking internal unrest. Their (and OPEC’s) very survival is being threatened.

And we believe we’ve put together an incredible video revealing how it works.

As for Arctic oil exploration and production, Gazprom Neft and PetroVietnam said that by the coming autumn, they expect to issue a lineup of their top-priority oil and gas fields and reach a final agreement on the terms of the joint venture.

After the energy documents were signed, Medvedev said Vietnam appeared ready to be part of a free trade zone in cooperation with the Russian-led Eurasian Economic Union.

“Almost all of the parameters have been agreed, and the preparation of documents have reached the final stage,” the Russian premier said, and added that he hoped Moscow and Hanoi would sign a contract on the matter soon. Dung said he expects those papers will be signed in the middle of 2015.

“Our goods turnover has dropped a bit lately, and in order to improve the situation, we decided to instruct our ministers, businessmen, and organs from both sides to take measures on signing an agreement soon on a free trade zone,” Dung and Medvedev said in a joint statement.

The Eurasian Economic Union is an economic association of countries primarily from northern Eurasia that came into effect on Jan. 1, 2015. Besides Russia, its members include Armenia, Belarus and Kazakhstan. Kyrgyzstan will formally join next month. – Oilprice.com