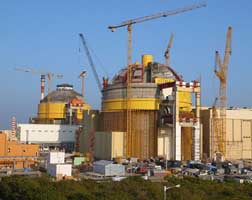 India and Russia have agreed to build an additional six nuclear reactors at a new site in India after summit talks between Russian President Vladimir Putin and Prime Minister Narendra Modi in New Delhi.

According to Rosatom, a Russian state-owned reactor manufacturer, the two countries want to build six Russian-design nuclear reactors on a new site in India to boost nuclear cooperation in third countries and new nuclear technologies.

The countries are considering building nuclear plants together.The company said Russia will offer to build its third-generation VVER reactor on the new site and would increase the level of participation of Indian companies in the project.There isn’t a firm contract yet, but rather an agreement to work towards a contract.If confirmed, the agreement would be one of the biggest nuclear industry deals in recent years, and would bind the two countries for decades.

Two Russian-built VVER-1000 reactors have been in commercial operation in Tamil Nadu’s Kudankulam since 2014 and 2017 respectively. Construction on two more started last year with targeted operation in 2025 and 2026.

In 2017, both governments agreed to build reactors 5 and 6 on the site and at the time Putin announced that Russia was ready to build a dozen reactors in India over the next two decades.

“We expect to start building a series of new units at a second site in India in the near future,” Rosatom Director-General Alexey Likhachev said.