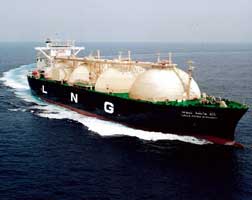 Shell has authorised a US$12 billion investment in a huge energy project to send supercooled gas from Canada to China and other Asian countries as they transition from coal to gas.

The project will be Canada’s biggest ever infrastructure project, and is the world’s first major liquefied natural gas project to be approved in five years. Shell has a 40% stake in the US$31billion Canada LNG joint venture, along with Malaysian, Chinese, Japanese and South Korean energy firms.

“The world’s appetite for LNG, where gas is cooled to -162°C so it can be shipped in huge tankers, had exceeded expectations in the past year and made the project viable”, Shell said.

China is expected to see a major increase its consumption of LNG, as it switches to gas as in an effort to curb air pollution problems caused by coal power stations.

“We believe LNG Canada is the right project, in the right place, at the right time,” said the company’s chief executive, Ben van Beurden. Shell is currently the leading trader of LNG, after its GB£47 billion acquisition of gas firm BG Group three years ago.

Construction will begin immediately on the Canada project, with gas ready to ship in the mid-2020s, potentially as early as 2023.

Commenting in the projections, Jessica Uhl, Shell’s chief financial officer, said “We believe the market needs more supply – and the timing of when this project will come on stream sits nicely with the market fundamentals.”

The Canada LNG project is said to be more competitive than US projects, as supplies would reach Asian countries in 10 days, almost two weeks faster than gas shipped from the US Gulf, which has to travel via the Panama Canal.

The scheme will be utilise a new 416 mile pipeline being built to transport gas from fields in northern British Columbia to the coast, where it will be processed and stored before being transferred to tankers.

Uhl said the company’s engagement with First Nations and local communities had been truly unprecedented, and suggested she did not expect the project to be delayed by opposition.

“Clearly there’s been challenges on pipelines around the world … We think we’ve adequately managed that risk to date,” she said.

The scheme would provide positive cashflow for Shell even if gas prices fell significantly.

“We sense that the risks from the Shell perspective are lower than many in the market may think,” said analysts at investment bank Barclays. Shell’s share price was up 0.15% on Tuesday.