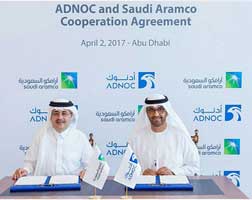 Saudi Arabia and Abu Dhabi will be teaming up to improve their oil and gas, renewables and carbon management industries through two partnership deals.

Abu Dhabi National Oil Company (ADNOC) and Saudi Aramco will focus on the development of new oil and gas technologies to help them better manage the low oil price environment. Saudi Aramco also agreed to work with Masdar City in Abu Dhabi on renewable energy and carbon capture for use in Saudi Arabia, the UAE, and the world.

Under the oil and gas agreement, Adnoc and Aramco will collaborate to identify technologies that could improve operational performance and efficiency across the oil and gas value chain, according to a statement. The deal was signed by Sultan Al Jaber, the ADNOC chief executive and Minister of State, and Amin Nasser, the Aramco president and chief executive.

The tie-up will foster a “culture of knowledge sharing” between the companies, Nasser said. According to Al Jaber, the increased cooperation “will further ensure our long-term economic and energy resilience”.

“This agreement reinforces our renewed approach to partnerships, which are aimed at leveraging and building on existing industry expertise. Innovation and technology are critical to our growth strategy, and there is a strong focus on integrating new technologies into our upstream and downstream operations, as we work to harness maximum value,” Al Jaber said.

Since taking over the helm of ADNOC in February 2016, Al Jaber has moved rapidly to implement a level of change rarely seen at such a large energy company, especially one in the state sector.

The collapse in oil prices from late 2014 hit the worldwide oil industry hard and gave renewed impetus for reform, especially at the Arabian Gulf’s state oil companies.Al Jaber has previously said that a different approach to partnerships will help ADNOC to meet ambitious targets for its five-year business plan and the broader 2030 goals.

As the energy industry looks to produce fossil fuels at cheaper costs, these companies are also looking to diversify their portfolios for life after oil.

The renewable energy partnership between Masdar and Saudi Aramco is expected to give Masdar an opportunity to support the delivery of affordable and sustainable energy in the kingdom, said Mohamed Al Ramahi, the chief executive of Masdar. He also noted that Saudi Arabia has a vast potential for growth in the renewables sector.

Saudi Arabia has ambitious renewable energy targets under its National Renewable Energy Programme, the official plan for installing 9.5 gigawatts (GW) of renewable energy by 2030 with the interim target of 3.45GW by 2020.

Ultimately, a successful push into clean energy will better position Aramco for its stock market flotation, planned for 2018, according to Pierre-Louis Brenac, the managing partner and Middle East head of the Paris-based consultancy Sia Partners.

“Saudi Aramco has been pushing strongly for renewables, which is a global trend among oil companies,” he said. “They want to rebalance their portfolio. It relates quite well with Aramco’s IPO, diversifying between fossil and renewables for an IPO success.”