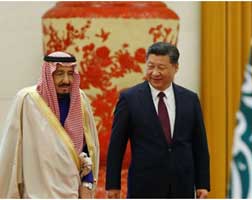 Saudi Arabia’s King Salman recent visit to China oversaw the signing of deals worth as much as US$65 billion as the world’s largest oil exporter looks to cement ties with the world’s second-largest economy. Saudi and Chinese companies signed 21 deals, ranging from exploring investments in oil and petrochemical plants to ecommerce and co-operating in renewable energy markets.

Meanwhile, its agreement with Norinco aims to explore further strategic cooperation and investment opportunities in China, including the development of refinery and chemical facilities,

“Saudi Aramco’s Crude-to-Chemicals initiative which aims to directly convert crude into petrochemicals, eliminating the entire refining step of the process, could change the competitive dynamics of petrochemical feedstocks and assist in developing advanced new materials as well as enable new uses,” Amin Nasser president and chief executive officer of Saudi Aramco said during the forum.

For Saudi Aramco, the potential investments fit with its strategy to expand its refining and chemicals portfolio in its bid to diversify assets and secure long-term agreements for its oil.

Beijing, for its part, has recently loosened its grip on a sector long dominated by the country’s top three energy giants in an effort to boost private investment as the economy cools. The Norinco deal could involve exploring the possibility of a greenfield refinery and chemical plant in Panjin, Liaoning province, while also upgrading an existing refinery and petrochemical facility in the same location, an industry source said.

“This MoU shows Aramco is determined to expand its market share in the Far East by looking beyond oil majors and working closely with new independent clients within its biggest market,” said Sadad al-Husseini, an energy consultant and former senior Aramco executive.

There was also an agreement for the kingdom to participate in China’s Chang E-4 moon mission and a partnership agreement for manufacturing drones.