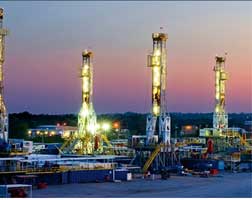 Nabors Industries Ltd. and Saudi Arabian Oil Company (Saudi Aramco) have signed an agreement to form a new joint venture (JV) to own, manage and operate onshore drilling rigs in the Kingdom of Saudi Arabia.

The joint venture, which will be equally owned by Saudi Aramco and Nabors, is anticipated to be formed and commence operations in the second quarter of 2017.

As part of its commitment to developing a competitive Saudi energy sector, Saudi Aramco has sought to localize industry hubs in order to foster economic diversification and job creation.

The joint venture with Nabors is one of the anchor projects that has grown out of this strategy which supports the wider development and localization of industries such as rig and rig equipment manufacturing and casting and forging.

The JV will also leverage Nabors’ established business in Saudi Arabia to begin operations, with a focus on Saudi Arabia’s existing and future onshore oil and gas fields.

Saudi Aramco and Nabors will each contribute land rigs to the Joint Venture in the first years of operation along with capital commitments toward future onshore drilling rigs which will be manufactured in Saudi Arabia.

Nabors Chairman, President and CEO, Anthony Petrello, is welcoming the opportunity to expand Nabors’ decades-long and mutually beneficial relationship with Saudi Aramco as well as extend its commitment to the country.

“This venture represents a new chapter in the operator-contractor relationship. We fully expect the venture’s shared interest and collaborative efforts to result in even higher levels of safety and efficiency, while enhancing Saudi Aramco’s well productivity and cost savings,” he added.

Nabors Industries, based in Hamilton, Bermuda, owns and operates the world’s largest land-based drilling rig fleet and is a leading provider of offshore platform rigs in the US and numerous international markets.  Saudi Aramco is a Saudi Arabian national petroleum and natural gas company based in Dhahran.