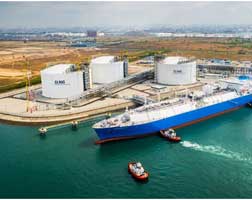 At its first annual Energy Trading Summit in Singapore last week, a poll of senior energy sector leaders found that four out of five voted Singapore as the country most likely to become the Asian LNG trading hub in the next five to 10 years.

LNG is touted as the fuel of the future. Its zero sulfur content and relatively low levels of nitrogen oxide emission mean that LNG outperforms other conventional marine fuel on a local emissions basis.

From 2019, the Singapore government will tax emitters of greenhouse gases for every ton of gas they release into the air. For the marine industry, the International Maritime Organization has set a 2020 deadline for marine fuel sulfur to be capped at 0.5% from the current 3.5% limit.

Within the next three years, the shipping industry will be forced to look for alternative and cleaner fuels, and LNG is one of the solutions.

“As the world’s largest bunkering port, Singapore remains committed to ensuring that the maritime industry has access to cleaner marine fuels. We plan to be LNG bunker-ready as early as 2020,” said Senior Minister of State, Ministry of Trade and Industry, KohPoh Koon at the Pavilion Energy LNG bunkering launch ceremony.

Following the award of LNG bunkering licenses to Pavilion and FueLNG last year, the Maritime Port Authority of Singapore is embarking on a three-year LNG bunkering pilot program to ensure that LNG bunkering is carried out safely, efficiently and reliably, said Dr.Koh.

“Trading infrastructure and institutional structures are in place, and the country has a strong trading talent pool and strategic geographic location — all factors supporting the development of LNG trading capability.”

Survey respondents identified Australia, Qatar and the US as the top three LNG exporters to Asia in five years.

The Singapore Exchange has launched several Singapore LNG Index Group (Sling) indices, covering the Singapore, North Asia and the Dubai, Kuwait and India regions, for which there is “strong support”, said Edmunds.