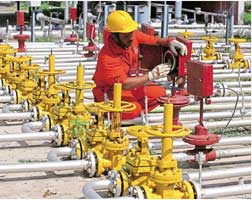 India is considering the possible relocation of its natural gas-based power plants to Indonesia as more than half of India’s gas-based generation units are “stranded” due to shortage of acid.

This was one of the subjects discussed at the 1st India Indonesia Energy Forum, held in Jakarta on April 21, according to a statement from the government of India.

The statement quotes Indonesian Minister of Energy and Mineral Resources Ignasius Jonan as saying that a 19-member team of energy officials from Indonesia will visit India soon to discuss various topics, including the relocation of gas-fired power plants.

India has 25,329 megawatts (MW) of gas-based power plants, of which 14,305 MW are technically “stranded” — fully or partly inoperative due to lack of gas supply. These plants are estimated to have consumed investments of Rp1.24 trillion. In 2016-17, they operated at a mere 22.51% plant load factor, producing 49 billion units of electricity.

The idea of relocating some of the plants to other countries has been knocking about for some time.

India-based electric generation power company Reliance Power, which has set up a huge 2,400-MW plant at Samalkot in the East Godavari district of Andhra Pradesh, was reported to be mulling the idea of shifting it to Bangladesh. The plant was to be fed by the gas that was expected to be produced from Reliance Industries’ D-6 field in offshore K-G basin.

An industry observer said Reliance Power was behind the push for relocating plants to Indonesia.

The relocation of gas plants to Indonesia is also seen as a means of balancing trade between the two countries. India imports a lot of coal from Indonesia — worth US$3.5 billion in 2016.