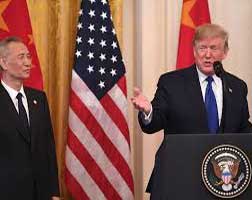 In what can be considered as a sweetener to the long running duel between the US and China, US President Donald Trump recently signed the first stage of a US-China agreement said to be a truce. The preliminary deal, which comes ahead of Trump’s 2020 re-election campaign, boosts Chinese purchases of US agricultural, manufacturing and other goods, and includes enforcement mechanisms.

China has pledged to buy an additional US$200 billion worth of American goods and services by 2021 and is expected to ease some of the tariffs it has placed on American products. Agriculture purchases represent US$32 billion of the US$200 billion total, and include oilseeds, meat, cotton and other commodities.

As part of the phase one-agreement, a portion of tariff rates for China will be reduced if the country adjusts some of the ways it manages its state-run economy, said the Trump administration. Thus, the deal cuts US tariffs to 7.5% on around US$120 billion in Chinese products, and keeps in place levies on some US$360 billion of Chinese imports.

The deal, which caps more than two years of tense negotiations between the two countries that had been in the troughs of an economic war, has been widely welcomed by companies, investors, and policymakers.

White House economic adviser Larry Kudlow was also quoted as having said that the US will take “proportionate actions” if China doesn’t live up to its commitments, and defended Trump’s use of import duties to spur Beijing to negotiate.

China also pledged to give US companies more access to its financial-services sector, to refrain from devaluing its currency to aid exporters and to stop forcing American firms to share their technology as a condition of doing business in China.

Kudlow also said that Washington and Beijing will begin talks on phase two of the deal “immediately,” but Chinese media has reported those negotiations may not begin soon.

Trump said the tariffs that remain would be removed pending progress on the second phase of negotiations.