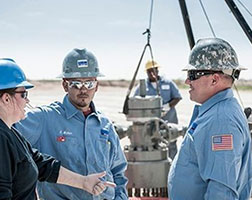 Engineering giant Weir Group is to implement further cost-cutting measures, including job losses, after a sharp fall in orders for its oil and gas business.

The Glasgow-based company, which makes valves and pumps for the energy and mining industries, said oil and gas orders fell 23% in the first quarter.

Weir expects the decline to continue in the second quarter.

It plans to cut 125 jobs, mostly in its North American oil and gas business.

It will also consolidate its service centres in the region in a bid to deliver cost savings of £10m.

In a trading statement, Weir said oil and gas markets had been hit by much lower oil prices, which had led to significant reductions in activity levels.

There was better news from the company’s minerals division, which saw orders rise year-on-year by 5% between January and April, in line with expectations.

However, Weir warned that mining end markets continued to be challenging, with iron ore prices falling further in the first quarter.

“Trading conditions in oil and gas markets were challenging through the quarter with a steeper decline in the North American rig count than the market had anticipated.

“Oil and gas activity levels are still falling and we expect a further decline in divisional revenues in the second quarter.

“In response the group is taking further actions to support profitability, including additional workforce reductions and service centre consolidations.”