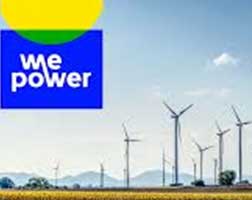 WePower, the blockchain-based green energy trading platform, announced recently that it has successfully raised US$40 million from the 22,933 contributors during its ICO, making it one of the most demanded blockchain projects of the year.

The successful ICO will further WePower’s goals of driving global green energy adoption and promoting sustainable living. With the whitelisting closed at about 50,000 confirmed participants and registrations nearing 300,000 people, WePower has shown that green energy and sustainability are some of the most supported challenges by communities across the globe that blockchain can solve.

During its presale, WePower raised US$30 million, US$11 million of which came from a public presale round in October of 2017 and US$19 million from strategic investors and funds. Some of the committed partners and investors from the presale include: Galaxy Investment Partners, DNA Fund, Blockchain IL, LDJ Capital, Science, OGroup/Kryptsu, Prime Block Capital, Algo Ledge, Connect Capital, and Everblue Capital.

WePower creates opportunities for green energy developers, such as solar or wind plant builders, to raise capital by selling future energy production upfront in the form of energy tokens. Unlike other similar projects, WePower is strongly focused on partnerships with utility companies. The company has already announced strategic agreements with Elering AS, an independent electricity and gas system operator in Estonia, the Ministry of Energy of the Republic of Lithuania, 220 Energia, and Spanish/Italian energy companies such as Conquista solar, Civitas project and Novacorex. These energy providers will work with WePower to develop a new generation energy ecosystem where green energy financing is global, lean and economically beneficial to all parties involved.

Aside from a smart contract-based financing mechanism, WePower’s technology also creates an opportunity for a transparent green energy accounting. WePower operates a distributed open ledger, which records when and in what volumes green energy financed on the platform was produced and supplied into the grid. At the moment, such accounting is based on instruments as paper certificates. With WePower technology a whole new level of transparency in green energy account becomes possible that does not exist today, to make investing in green energy producers easier and a reality for anyone.

WePower was also selected to join Australia’s Startup bootcamp Energy Australia Accelerator (STBC). SBC is the second largest accelerator program globally, and the first to invest in a company driving innovation through token economics. As part of the SBC Energy Australia program, WePower will be supported by some of the biggest energy companies in Australia, including Energy Australia and Spotless.

“We are absolutely thrilled and thankful for the success that WePower has achieved in both its presale and token sale,” said Nikolaj Martyniuk, Co-Founder and CEO. “The interest that we’ve gotten both from our community and potential investors shows the viability of bringing green energy onto the blockchain. Our successful fundraising is just the first step in making the smart grids greener and moving towards a more sustainable future.”