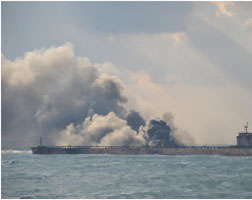 A burning Iranian oil tanker that had drifted into Japan’s exclusive economic zone has sunk after a collision on January 6, Chinese state television said.

The stricken tanker, called the Sanchi, which had been adrift and on fire for more than a week following the accident with another vessel in the East China Sea, had “suddenly ignited” around noon (0400 GMT), China Central Television said.