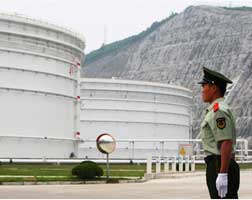 China should further expand its strategic petroleum reserve (SPR) in the next two years to ensure safe supply of oil in the country, analysts said. Although China’s SPR is on the rise, it remains fragile and insufficient for the 90-day international safety line.

According to data released by the National Bureau of Statistics (NBS) of China, the country has built a total of nine national petroleum reserve bases in cities across the country – including Zhoushan in East China’s Zhejiang Province, Dalian in Northeast China’s Liaoning Province and Lanzhou in Northwest China’s Gansu Province – up to the middle of 2016.

“China may be the world’s most vulnerable country when it comes to the SPR, because of its high dependence on oil imports,” said Lin Boqiang, director of the China Center for Energy Economics Research at Xiamen University.

In 2016, China’s dependence on crude oil increased to 65.4%, up by 4.6% in 2015, according to a report released by the China Petroleum Enterprise Association in May.

“China’s current SPR can meet the demand for between 40 to 50 days, much lower than the international safety line of 90 days. And the oil supplies could be cut off anytime given China faces increasingly tense international situations, and if that happens, China’s military and civil functions will be crippled due to a lack of oil,” said Lin.

He also suggested China build as much as 30 reserve bases, as well as establish a special organization to buy in petroleum when the prices are comparatively low in the international market.

When asked whether the Belt and Road Initiative, in which 19 countries along the route will carry out some 50 energy cooperation projects, could relieve China’s high dependence on the international oil market, Lin said that the initiative will provide opportunities by offering new import and transport alternatives but will not radically address the problem.

The SPR is crucial to the national energy and economic safety and many countries have already established complete SPR systems.

For instance, the current US strategic petroleum reserve is able to support a 149-day import protection, Xi Jiarui, petroleum analyst with JLC Energy, an energy information-website, was quoted as saying.Xi suggested that private enterprises should also be more involved in contributing to the national petroleum security.