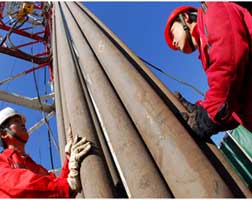 China will be issuing more oil and gas exploration tenders, and will also be building two shale gas facilities in the central and southern parts of the country, its Ministry of Land Resources announced.

The ministry said at a news conference in Beijing that following an investigation, China is also likely to conduct commercial production of shale gas in the southern city of Zunyi in Guizhou province and in Yichang in Hubei province.

The ministry did not give a timetable for the start date at the news conference.

Natural gas is set to play an increasingly important role in the country’s energy mix, with the nation pushing to wean itself off coal－betting big on a shale gas boom to rid itself of its dependency on the more polluting energy source and on foreign gas imports for better energy security.

According to the ministry, oil and gas exploration efforts cover a vast 500,000 square kilometers area in the north of the country alone and China has also discovered new natural gas and light crude reserves there.

China has vowed to further strengthen its oil and gas pipeline network during the next decade. That’s in order to further boost the share of gas, a cleaner fuel, in the country’s energy mix.

With 112,000 kilometers of oil and gas pipelines in the country so far, China will need to build another 128,000 kilometers of pipeline in the next few years, the nation’s top economic regulator said last month.

Energy companies are eyeing a bigger slice of the booming sector, with China Petroleum and Chemical Corp, the world’s biggest refiner, saying it will double its annual natural gas output by 2020 to 40 billion cubic meters.

Sinopec’s Fuling shale gas field, China’s first commercial shale gas production program, was launched in 2014. It will reach an annual output of up to 10 billion cu m by the end of this year, Sinopec said.

Wang Lu, an Asia-Pacific oil and gas analyst at Bloomberg Intelligence, said Sinopec’s Fuling project would play a leading role in China achieving its goal of producing 80 to 100 billion cu m in 2030, and its shale gas production may contribute about 4-5% of China’s total gas consumption by 2020.