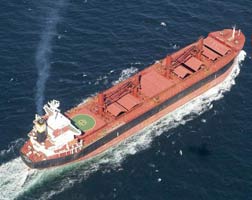 Gas storage on vessels in Asia?

Gas storage on vessels in Asia?

SINGAPORE – Oil product traders in Asia are starting to consider storing gasoil and gasoline on tankers amid oversupply, weak demand and low crude prices, a move that could mean betting prices for the fuels would recover in two to three months.

Cheap crude oil has been encouraging refineries to maximize throughput, and traders in Asia have also been faced with new competition as capacity added in the Middle East takes market share in their traditional outlets in Europe and Africa.

With oil holding in contango – where prompt contracts are priced lower than those in the future – traders could store surplus fuel in tankers to sell after prices have recovered, a practice already underway in crude markets.

One shipbroker said that inquiries have been trickling in from traders to store gasoline in vessels for between 45 and 90 days, though nothing firm has been fixed.

“If you can get a cheap cargo, then it might be possible to store it until the market recovers,” a Singapore-based gasoline trader said, adding that another motivation for floating storage was that there was little space left in onshore tanks.

But traders also said a risk could be that prices do not pick up, eroding the potential to profit from a storage play.

“With the start of Middle East refineries, there are really not that many demand outlets left for traders in Asia, so it’s risky especially with volatile crude oil prices,” a Singapore-based middle distillates trader said.

Singapore’s onshore light distillates stocks, made up mainly of gasoline, rose to a 3-1/2-year high last week, while gasoil stocks stood at a nine-week high.

As a result, traders said, three companies or more were making inquiries to convert storage for other products such as diesel into gasoline tanks.

Other companies are delaying cargoes or slowing sailing speeds, shipbrokers said. Also, two vessels carrying light distillates – either gasoline or blendstock for gasoline – from Europe to Singapore are detouring around South Africa instead of passing through the Suez Canal, the brokers said, adding more than 10 days to their journeys.

For gasoil, traders said, floating storage may be profitable, depending on available freight rates.

The contango between gasoil prices for cargoes loading in February versus those of March is now nearly 90 cents a barrel, while the gasoline spread is around $1 a barrel.

Storing these oil products on land costs about 80 to 90 cents a barrel, giving a slim margin for profit.

Rates for storing clean oil on newbuilt long-range vessels for three months are running about US$27,000 a day, which works out to about US$1.13 a barrel.