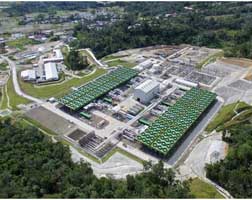 As part of Indonesia’s efforts to become the world’s top geothermal electricity producer, the government is planning to build 12 geothermal plants with a combined investment value of US$4.3 billion and a total capacity of 865 megawatts (MW).

Indonesia currently operates geothermal power plants with a total capacity of 1,698.5 MW and aims to increase it to 1,858.5 MW before year-end through the completion of three other facilities, namely the Sarulla Unit II plant (110 MW) and Sorik Merapi Modular Unit I plant (20 MW) in North Sumatra, and the Karaha Bodas plant (30 MW) in West Java.

In the long run, it aims to operate 7,200 MW geothermal power plants by 2025, or 3.8% of the total targeted 23% share of the national energy mix from renewable sources.

“We have planned some breakthroughs in order to meet that target, including by giving direct assignments to state-owned enterprises and holding an open tender for the projects,” Rida Mulyana, the Energy and Mineral Resources Ministry’s new and renewable energy director general, said last week.

The government will offer five geothermal working areas located mostly in the country’s eastern part through the open auction, expected to be held before the end of June.

“We are still waiting for the issuance of a new ministerial decree on such an auction,” said Yunus Saefulhak, the ministry’s geothermal energy director. “Hopefully, the decree can be issued in June at the latest. After that, we will immediately hold the auction.”

There are also seven working areas that are set to be developed by state firms through direct assignment.

Electricity firm PLN has been appointed to develop three geothermal working areas, namely the Songa-Wayaua area in North Maluku with a capacity of 10 MW, Mt. Tangkuban Perahu in West Java with 2×55 MW and the Atadei area in East Nusa Tenggara with 30 MW.

Geothermal producer PT Geo Dipa Energy has also been assigned to develop two projects, namely in the Umbul-Telomoyo area in Central Java, which will generate 110 MW of electricity, and in the Mt. Arjuno-Welirang area in East Java with 55 MW.

Two other projects — in Kotamobagu, North Sulawesi, with a capacity of 110 MW and in Mt. Ceremai, West Java, with 2×55 MW — will likely be given to oil and gas giant Pertamina, said Yunus.

He added that various private firms had shown interest in conducting preliminary survey assignments plus exploration (PSPE), including companies from Italy, Turkey and Australia.

Under the PSPE, a company will first collect all the data needed from one working area through exploration activities before presenting it to the government.If the company is still interested, the government will directly appoint it to develop the area. Otherwise, the area will be offered to a state firm.

The government has estimated that each developer will have to disburse US$5 million for every 1 MW produced by a geothermal power plant.

Indonesian Geothermal Association chairman Abadi Poernomo said private firms had often found it difficult to get financial support from banks to cope with the high investment and the lenders usually only provided them with short-term loans with high commercial interest rates.

“This problem has forced us to seek higher returns, resulting in high electricity tariffs,” he said.

To make the geothermal projects more attractive, the government has allocated Rp3 trillion (US$225 million) from the state budget and has been granted US$55.25 million from the World Bank to fund exploration activities for geothermal power plants conducted by the winners of the future auction.

The winners will later repay the exploration funds, so that the government can have revolving funds to support other exploration activities.