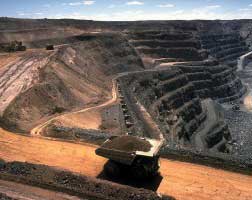 More lands for mining up for grabs in Mongolia

EOG Facebook
More lands for mining up for grabs in Mongolia

More lands for mining up

ULAN BATOR, Mongolia – Struggling Mongolia is hoping to drum up more foreign investor interest in its flagging mining industry after opening up an additional 10.1 million hectares of territory for mining exploration.

The country, estimated to possess US$1.5 trillion (S$1.98 trillion) worth of mineral resources like gold, copper and iron ore, will start the application process for exploration licenses on Jan. 26, the Ministry of Mining said.

Mongolia is trying to entice foreign investors back to the country, with many deserting after a series of controversial disputes and a perceived shift towards “resource nationalism”among legislators.

The additional space means that nearly a fifth of the country’s territory is now available for mining, amounting to 116,000 sq mi. Ministry spokesman, GalsanBodibilguun, said that the groundwork has been laid to issue exploration special licenses in an orderly and planned form, taking the infrastructure, green development, and investment equality into consideration.

Licenses may be granted to investors via application as well as open-tender bidding, he said.

Mining is central to Mongolia’s economic ambitions. Copper from the giant OyuTolgoi mine run by Rio Tinto makes up 44 per cent of the country’s exports. Coal is a distant second with 15%, followed by iron ore with 8%.

However, the industry also been hurt by falling commodity prices and a weakened global economy, with foreign investment from January to November last year falling 71% on the same period a year earlier.

A Mongolian judge cancelled 106 licenses in 2013 during an investigation into corruption. The Toronto-listed Kincora Copper wrote off C$7 million (S$7.74 million) in 2013 for the loss of licenses held by its subsidiary Golden Grouse, but it may see two of them restored or be compensated next month, the company’s chief executive Sam Spring said this week.

Mongolia has also enlisted the help of foreign miners to take over the management of ErdenesTavanTolgoi, the state-owned mining unit seeking to develop the country’s largest coal deposit in the south Gobi region.

The ministry said it plans to wrap up negotiations for US$4 billion of investment with China Shenhua Energy, Japan’s Sumitomo and Energy Resources LLC, a wholly owned unit of the Mongolian Mining Corp, before the start of Mongolian lunar new year on Feb. 18.