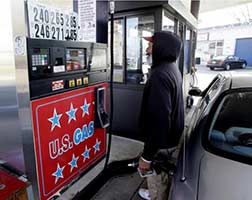 CONNECTICUT – Oil prices fell as much as 3% after US stockpiles hit record highs, and analysts and traders said the market could shed more of a two-week rebound that was spurred by expectations of lower output.

The record inventory was a sign the market was still struggling to find a home for some 2 million barrels per day of oil. The glut has prevented prices from forming a bottom to a sell-off that began last summer, analysts said.

“It proves that the price retracement we had on the capital expenditure cuts and falling rig counts may have been premature,” said Gene McGillian, senior analyst at Tradition Energy in Stamford, Connecticut.

Energy firms slashed billions of dollars from their oil exploration budgets, and the number of US oil drilling rigs fell to three-year lows after crude prices fell by about 60 % from their June peaks.

Fawad Razaqzada, technical analyst in London for FOREX.com, said Brent could fall to US$53 a barrel and US crude could go below US$47.50 a barrel.

After the rout over the past seven months on worries of a global supply glut, oil prices have risen in five of the last nine sessions, due mostly to what traders say is short-covering.

The gain, of roughly 10 %, has led some to think the market is on track to a larger rebound. Kuwaiti Oil Minister Ali al-Omair believes crude will hit US$60 a barrel by year-end.

The International Energy Agency, however, sees a price well below the US$100 level of the last three years.

“If a rally takes hold, it will be sold into,” said Tariq Zahir, managing partner at Tyche Capital Advisors in Laurel Hollow, New York.

As proof of the market’s near-term weakness, the “contango,” or discount, between U.S. crude for prompt delivery and a year ahead widened on Wednesday to US$11 a barrel, its biggest in a week.