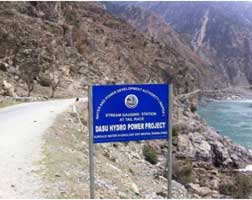 Chinese engineering and construction company China Gezhouba Group Company (CGCC) has been awarded two contracts worth Rs180 billion for the construction of a part of the Dasu hydropower project on the Indus river in northwestern Khyber-Pakhtunkhwa province.

CGCC signed an agreement with Pakistan’s Water and Power Development Authority (WAPDA) for carrying out the main civil works in the first stage of the Dasu hydropower project.

This stage of the project, expected to be completed in 2021, will generate 2,160 megawatts (MW) of electricity. The selection of the contractor was done through international competitive bidding among pre-qualified Chinese firms.

The project is being constructed on the Indus river, upstream of Dasu town in Kohistan district of the province.

The World Bank is partially funding stage-I, while a major chunk of funds is being arranged by WAPDA from its own resources and with the sovereign guarantee of the Pakistan government.

Pakistan’s power minister Khwaja Asif said the project is critical to the country’s energy needs and will herald a new era of affordable electricity generation.

The country faces a shortage of up to 8,000 MW, according to reports, leading to power cuts for hours in several parts.

Asif said the government will lay foundation stones for two other dams this year. WAPDA chairman Lt. Gen, (retired) Syed Muzammil Hussain said the total cost of the first phase of the Dasu project was estimated at US$4.2 billion.

Hussain said the second phase – capable of generating 2,160MW – would not take a long time given the fact that the main dam will already be available and the second stage will involve only setting up a power house at an estimated cost of US$2 billion.