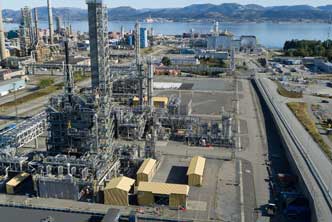 Shell Catalysts & Technologies has entered an agreement with Technology Centre Mongstad (TCM) to test a technology for capturing carbon dioxide (CO2). The test will start in January 2023 and will last for five months.

Shell Catalysts & Technologies offers two leading carbon capture technologies: The CANSOLV CO2 Capture System and ADIP ULTRA. The test at TCM will involve a proprietary amine-based solvent that is part of the CANSOLV CO2 technology. It is expected that this will be then qualified for delivery to carbon capture and storage (CCS) projects around the world.

Shell Catalysts & Technologies has previously carried out two test campaigns at TCM, in 2014–15 and 2016. One of its technologies has been chosen for Hafslund Oslo Celsio’s full-scale capture plant at Klemetsrud, Oslo, Norway. This project is part of the large Norwegian full-chain CCS project named Longship and, following the planned start-up in 2026, 400,000 tons of CO2 emitted by Celsio each year will be captured and permanently stored in the Norwegian shelf.

Nick Flinn, VP Decarbonisation Technologies, Shell Catalysts & Technologies, says, “We are very pleased to continue using TCM’s excellent facilities and expertise. The purpose of the next campaign is to make a final test and verification of this upgraded solvent that will be introduced to the market.”

Nick emphasises that Shell is strengthening its efforts in the energy transition field to help realise a carbon-neutral world on a global scale. He says, “For many years, Shell has strived to minimise CO2 emissions utilising its cutting-edge technologies. Today, we possess reliable and economically feasible carbon-capture technologies, supported by many years of research and development activity, and a robust track record of commercial plants around the world.”

Nick continues, “TCM’s abundant knowledge and experience in environmental impact assessment, and its state-of-the-art testing environment, will further raise the level of our CO2 capture technologies, enabling us to accelerate business expansion, especially in the vital UK and European markets. We expect that the new testing programme will contribute to realising carbon neutrality in the years ahead.”

Muhammad Ismail Shah, Managing Director at TCM, also welcomes the collaboration. He says, “It is very satisfying that a leading capture technology developer such as Shell Catalysts & Technologies has, again, chosen TCM as the arena for its carbon capture tests. Our staff are ready to ensure effective execution of the tests, and to provide expert advice throughout the campaign.”

Muhammad highlights the importance of an experienced capture technology supplier returning to TCM to run a campaign: “This shows that even the mature amine technology is still developing, and that suppliers are continuously making improvements and innovations to have better efficiency and to reduce costs when using the technology in a full-scale plant. Based on this, we believe that TCM will be relevant as an arena for testing both mature and completely new technologies for many years to come.”

“We will now make all necessary preparations for the upcoming campaign for Shell and look forward to welcoming their team,” Muhammad concludes.