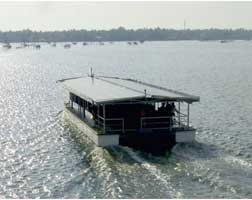 Chief Minister Pinarayi Vijayan of the coastal state of Kerala in India is now set to officially launch the country’s first solar passenger boat in the Vaikom-Tavanakadavu sector on January 12. In line with this, the state government of Kerala has sought additional central funding to roll out 10 more solar passenger ferries.

According to a senior official, a proposal has already been submitted to the Ministry of New and Renewable Energy for the additional 10 solar boats. The boats will be added to the 14 boats already under construction which will also be given the option of running on solar power.

The country’s first solar ferry “Aditya” will be deployed by the State Water Transport Department (SWTD) in the 2.5-km Vaikom-Thavanakadavu section in Alappuzha district from January 12.

Vijayan will officially launch the 75-seater solar boat, constructed by Navalt, a joint venture of two French companies and a Kochi-based Indian company, at a function at Vaikom boat jetty.Piyush Goyal, Minister of State for New and Renewable Energy with independent charge, will be the chief guest.

The plan is to replace the existing fleet with solar ferries step by step, with the centerearlier allotting a fund of Rs220 million for the project, the official said. It has been decided to give the option to run the boats on solar power too as part of the Go-Green initiative of the state government, the official added.

“It is a real achievement. Our operational costs will be reduced very much since we expect 40% reduction in fuel cost compared to the diesel-powered ones. It will be noiseless, vibration-free and non-polluting,” said Shaji Nair, MD Kerala State Water Transport Department (KSWTD), which operates the ferry.

“The battery and motor console, which underwent testing, are from France. The boat will be capable of plying the waters for 5 to 6 hours on normal sunny days. A trip between the two points takes 15 minutes. Since it is on experimental mode, the boat has in place an alternative power system to meet emergencies. The main expense is the cost of the battery which will have to be replaced after seven years. But overall it is cheaper if we operate it on a 10-hour basis daily,” said Sandith, who is also a marine architect.

“It runs on a technology which has been proven and is in use in France for past 15 years. Moreover, we scrutinized the boat at every stage. We are not blind to the allegations. But the allegations against the project ceased to have ground after the boat conducted a three hour non-stop operation in the presence of technocrats,” said Shaji Nair.