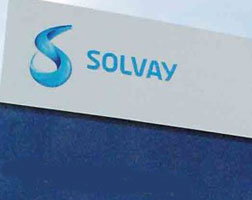 Brussels-based chemical firm Solvay has launched a hydrogen platform that will bring together all the innovative material and chemical solutions the Group has to offer to advance the emerging hydrogen economy. At the heart of the platform is Solvay’s membrane technology (ion conducting polymer), which constitutes a necessary component in the process of hydrogen production.

By creating this platform, Solvay is increasing its resources dedicated to this emerging market, including efforts in research and innovation. As from this year, Solvay is fully dedicating teams involving research, engineering, sales and marketing working together in crafting Solvay’s added value to the future hydrogen market.

Together with its membrane technology, under the brand Aquivion that will be a key contributor to the electrolyser and fuel cells markets, Solvay also intends to bring other hydrogen applications and components to the market, such as hydrogen tanks.

“The hydrogen economy has taken-off, and with our new hydrogen platform, we are partnering with our customers in the electrolyser and fuel cells space to make it happen,” said Solvay CEO Ilham Kadri. “Green hydrogen will be one of the most competitive low carbon solutions for transportation applications in the near future and I’m proud that Solvay’s membrane technology will be a key element in the transition towards cleaner mobility, helping the fight against global climate change.”

As part of this commitment, Solvay has also joined the Hydrogen Council, a global CEO-led initiative that brings together leading companies with a united vision and long-term ambition for hydrogen to foster the clean energy transition. Solvay’s hydrogen platform is integral to the Group’s One Planet initiative, which includes ten measurable commitments to achieve the SDGs across three focus areas: climate, resources and better life.

Solvay has been researching and developing its ionomer technology for the past twenty years in preparation for the development of hydrogen technology. Solvay’s technology has demonstrated its value proposition with customers; the company has multiple qualifications underway with sizable sales potential in the next few years.

While lithium-ion batteries have emerged as the preferred solution to make the automotive sector more sustainable, this is not enough as they do not cover all needs related to the necessary decarbonisation to make transportation truly sustainable. Hydrogen is poised to fill that gap.

Production of green hydrogen via water electrolysis is expected to reach more than 100GW of global capacity by 2030, while the global fleet of fuel cell electric vehicles – ranging from large passenger cars to heavy-duty commercial vehicles, trucks, buses and even trains – is forecasted to reach several million vehicles by 2030.

Clean hydrogen fuel is a key component of the EU’s Green Deal, as it is a recognized technology needed to support ambitions towards an ecological and sustainable energy transition. Public support for hydrogen is increasing exponentially, with US$10 billion of post-Covid19 stimulus being dedicated (mostly in Europe and APAC) to green hydrogen R&D and infrastructure deployment.