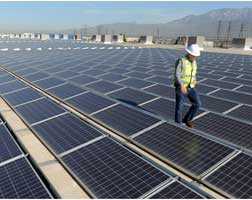 The U.S. Solar Energy Industries Association have warned that U.S. president Donald Trump’s move to slap steep tariffs on imported panels will sabotage tens of thousands of jobs, raise the cost of going solar and quash billions of dollars of investment.

The criticism from the industry’s top trade association raises questions about whether Trump’s tariff, billed by the administration as a move to protect U.S. manufacturing jobs, will backfire by forcing layoffs in what had been one of the energy industry’s fastest growing sectors.

“We are not happy with this decision,” SEIA President Abigail Ross Hopper said on a conference call with reporters. “It’s just basic economics — if you raise the price of a product it’s going to decrease demand for that product.”

The administration announced the tariffs on imported solar panels, as well as washing machines, on Monday. The 30 % tariff on imported panels in the first year will decline over four years, and 2.5 gigawatts of solar cell imports will be exempted each year. There is still uncertainty on when the tariffs will be imposed.

The tariffs could decrease the projected 11 gigawatt of solar forecasted to be installed in the United States this year by 2 GW, Hopper said, and result in 6.7 GW less solar over the four years of the tariffs’ implementation.

“It means billions of dollars of lost investment, 1.2 million homes that won’t be powered by solar,” Hopper said.

SEIA also expects the decision to cause the loss of 23,000 jobs this year, with more losses in subsequent years. The U.S. solar industry employs more than 260,000 workers – about five-times more than the coal industry.

Only about 14 % of those 260,000 jobs are in manufacturing. Installers make up most of the rest of the industry and rely on low-priced imports.

The petitioners who sought trade relief, U.S.-based solar manufacturers Suniva and SolarWorld, had asked for the equivalent of a 50 % tariff.

Bankrupt Suniva, majority-owned by Hong Kong-based Shunfeng International Clean Energy, and SolarWorld, the U.S. arm of Germany’s SolarWorld AG, had said they cannot compete with the influx of cheap imports which has caused panel prices to fall more than 30 % since 2016.

In a note to clients, Raymond James analyst Pavel Molchanov said the 30 % tariff, while not ideal, would be “manageable” for most of the industry. He estimated that it would increase the cost of a residential system by about 3 %, and boost the price of a utility-scale project by about 10 %.

SEIA, which spent nine months lobbying aggressively against trade remedies, acknowledged the outcome was better than feared for the industry, but still damaging.

“This administration really grappled with the understanding that solar is creating jobs,” Hopper said, “It does show restraint on the part of the president.”