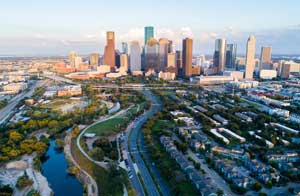 Almost 11 companies have expressed interest in supporting the large-scale deployment of carbon capture and storage (CCS) technology in Houston. Calpine, Chevron, Dow, ExxonMobil, Ineos, Linde, LyondellBasell, Marathon Petroleum, NRG Energy, Phillips 66 and Valero have agreed to begin discussing plans that could lead to capturing and safely storing up to 50 million tonnes/year of CO2 by 2030 and about 100 million tonnes by 2040.

The companies plan to help address industrial CO2 emissions in one of the largest concentrated sources in the US. Collectively, the 11 companies are considering using CCS technology at facilities that generate electricity and manufacture products that society uses every day, such as plastics, motor fuels and packaging.

If CCS technology is fully implemented at the Houston-area facilities these 11 companies operate, nearly 75 million tonnes of CO2 could be captured and stored per year by 2040. There are ongoing discussions with other companies that have industrial operations in the area to add even more CO2 capture capacity. They could announce their support at a later date and add further momentum toward the city of Houston’s ambitions to be carbon neutral by 2050.

“Houston can achieve our net zero goals by working together, and it’s exciting to see so many companies have already come together to talk about making Houston the world leader in carbon capture and storage,” said Sylvester Turner, Mayor of Houston. “We’re reimagining what it means to be the energy capital of the world, and applying proven technology to reduce emissions is one of the best ways to get started.”

Wide-scale deployment of CCS in the Houston area will require the collective support of industry, communities and government. If appropriate policies and regulations are put in place, CCS could generate tens of thousands of new jobs, protect current jobs and reduce emissions at a lower cost to society than many other widely available technologies. The 11 companies will continue to advocate for policies that enable the long-term commercial viability of new, expanded and existing CCS investments in Texas.

CCS is the process of capturing CO2 from industrial activity that would otherwise be released into the atmosphere and injecting it into deep underground geologic formations for safe, secure and permanent storage. With supportive regulations, CO2 from the Houston industrial area could be safely stored in the U.S. Gulf Coast region in formations thousands of feet below the surface or seabed.

The U.S. Department of Energy estimates that storage capacity along the U.S. Gulf Coast is enough to hold 500 billion tonnes of CO2 — more than 130 years of the country’s total industrial and power generation emissions, based on 2018 data.

Although renewables will continue to play an important role in a lower-carbon energy future, CCS is one of the few proven technologies that could enable some industry sectors to decarbonize, such as manufacturing and heavy industry. The International Energy Agency projects CCS could mitigate up to 15 percent of global emissions by 2040, and the U.N. Intergovernmental Panel on Climate Change (IPCC) estimates global decarbonization efforts could be twice as costly without CCS.