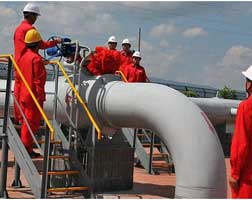 The Chinese government is currently in talks with state oil giants regarding the development of a natural gas pipeline company that could potentially give producers more access to infrastructure and would help to raise natural gas use in the country.

The National Development and Reform Commission (NDRC), China’s state economic planner, is discussing the deal with China National Petroleum Corp (CNPC), Sinopec Group, and China National Offshore Oil Co regarding which assets the future company will comprise, who the main shareholders will be, and how governance will be settled, according to Reuters sources.

The plan to create a natural gas pipeline company was first discussed some five years ago. Now it is part of China’s ongoing efforts to make its state-run energy firms more efficient.

Although the creation of a natural gas pipeline company will surely make gas producers’ access to infrastructure better and easier, the setting-up of such a venture will take time and make for a complex transaction, because it would involve billions of US dollars’ worth of assets, Lin Boqiang, a senior energy researcher with Xiamen University, said in an interview with an international news agency.

CNPC and Sinopec have sold over the past year part of their natural gas infrastructure assets. CNPC restructured the pipeline business, while several months after that Sinopec said that it was selling 50% in its Sichuan to East China Gas Pipeline Co to investors for the equivalent of US$3.4 billion (22.8 billion yuan), to raise funds to expand its natural gas business.

China is expected to account for 40% of the global annual growth in natural gas demand over the next five years, according to the International Energy Agency (IEA). Imports of the bridge fuel in China are running at record rates as Beijing pushes on with its cleaner energy agenda that should see the country satisfy 10% of its energy needs with gas in 2020, from 5.9% in 2015.