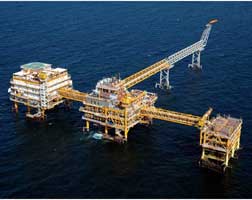 Natural gas supply from Iran’s giant South Pars field is expected to increase by 80 million cubic meters per day (mcm/d) after the launch of a new section of the national gas grid, according to Hamidreza Araqi, managing director of the National Iranian Gas Company (NIGC).

Araqi said the Iran Gas Trunkline 6 (IGAT-6) is expected to become fully operational by October which will increase gas supply by 70-80 million cubic meters daily. The pipeline branches off to the city of Ahvaz in Khuzestan Province and from there will be connected to a pipeline in Iraq for export to the western Arab neighbor.

Another part of IGAT-6 is due to supply gas from Ahvaz to Dezful in Khuzestan, with Khatam-al-Anbiya Construction Headquarters as contractor of the scheme, Araqi said.

Khatam-al-Anbiya is the engineering arm of the Islamic Revolutionary Guard Corps. The Iran Gas Trunkline (IGAT) is a series of large diameter pipelines passing from major energy producing areas in the south of Iran (Khuzestan and Bushehr provinces) that move natural gas to the northern regions.

An unnamed contractor is carrying out works on another part of the pipeline starting from Dezful under a build-operate-transfer (BOT) contract in order to deliver natural gas to Baghdad, Iraq’s capital, according to the gas official.

In July 2015, a BOT contract to expand IGAT-6 was signed by the Gas Engineering and Development Company and Pasargad Energy Development Company. The project includes laying 590 kilometers of pipelines in addition to installing five gas compressor stations at an estimated cost of US$2.2 billion.

South Pars phases 21-23 will provide natural gas for export to Iraq, Araqi said. According to Oil Ministry officials, an estimated US$8.5 billion in projects are underway to expand the natural gas network to small towns and villages in remote areas in the southern regions.

US$4.8 billion will be used to expand the national gas grid in urban and rural areas, US$1.6 billion to integrate villages with a population of over 20 households into the national grid, and another US$1.7 billion to supply 20,000 industrial units nationwide with natural gas.