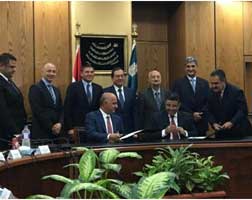 Egypt’s Belayim Petroleum Company (Petrobel) has signed a subsea contract with the US Baker Hughes (BHGE) for the phase II development of Egypt’s Zohr gas field.

The new contract comes in light of the ministry’s efforts to complete development works of Zohr field, whose first phase is set to start operations before year-end, Molla said.

He also stressed the importance of cooperation with leading global companies working in the oilfield services like Baker Hughes to benefit from their expertise and technological solution they provide, which reflect positively in committing to the set timeline and achieving the plan targeting the increase of natural gas production.

In a statement, Molla said: “Maximizing domestic energy resources and optimizing reliability of their supplies in Zohr field will strongly contribute in transferring expertise and advanced technologies they possess to the oil and gas production projects in Egypt.”

He added that the strategic partnership with Baker Hughes will be extended to a cooperation in the development and modernization of the petroleum sector to support the Ministry’s efforts in the development of workforces and equipment manufacturing.

The minister pointed out that the Zohr field project is among the biggest natural gas projects in the Mediterranean region, and will make significant changes in it, especially as it is characterized by large investments, record implementation timelines and plans to start production.

It will also support the installation, commissioning and start-up operations.