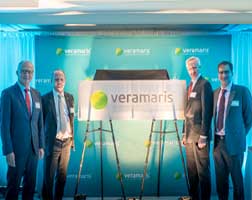 Veramaris, the joint venture between Dutch firm DSM and Germany’s Evonik, said to be revolutionising aquaculture with its sustainable omega-3 oil from natural marine algae, recently celebrated a major milestone in the construction of its new production site in Blair, Nebraska, US. It held a topping-out ceremony for the construction of the US$200 million facility, said to be progressing on-time and according to plan.

Commercial quantities of algal oil will be ready for delivery in mid-2019. Pilot-scale quantities are already being supplied to selected feed producers and farmers for market development.

“Our algal oil is the response to the industry’s call for a sustainable source of the omega-3 fatty acids EPA and DHA. The known provenance of all the raw materials used in our process makes the product fully traceable,” Veramaris CEO Karim Kurmaly said.

The initial annual production capacity of the Nebraska plant will meet roughly 15% of the total current annual demand for EPA and DHA by the global salmon aquaculture industry.

Veramaris uses locally sourced sugar in its fermentation process. The algae strain, Schizochytrium, which is applied, has the advantage of producing the essential omega-3 fatty acids EPA and DHA and the resulting oil has a concentration exceeding 50%. The production site will be entirely waste-free.

Veramaris’ highly concentrated algal oil will, for the first time, enable the animal nutrition industry to keep up with the increasing demand for these two essential omega-3 fatty acids without any reliance on fish oil obtained from wild fish stocks.

Until recently, the omega-3 fatty acids EPA and DHA added to animal feed have been almost exclusively from marine sources. Currently, a total of 16 million metric tons of wild fish are caught for the production of fish oil and fishmeal. With the help of natural marine algae, Veramaris contributes to closing the supply-demand gap for omega-3 EPA and DHA, while helping to conserve marine life and biodiversity in the oceans.

The successful product and process development was only possible thanks to the complementary competencies that Evonik and DSM bring to the collaboration: DSM has expertise in the cultivation of marine organisms including algae and long-established biotechnology capabilities in development and operations, whilst Evonik’s focus has been on developing industrial biotechnology processes and operating competitively large-scale manufacturing sites for fermentative amino acids.

To drive a positive change in feed production and food consumption, Veramaris is extensively working with all stakeholders along the value chain, including feed producers, farmers, retailers and NGOs. Pioneering collaborations have enabled key players in aquaculture to raise Atlantic salmon on diets totally free from marine ingredients, using Veramaris’ algal oil as a complete replacement for fish oil.

The existing Evonik site in Blair was chosen for the production of the omega-3 fatty acids EPA and DHA to take advantage of Evonik’s decades of operational experience for large-scale biotechnology operations. The company has been operating a facility there for the fermentative production of Biolys – the amino acid L-lysine – for almost 20 years.