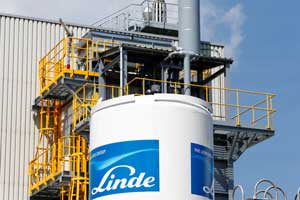 As a result of the Russian invasion of Ukraine, Linde, the world’s largest industrial gases company, says it has ended its participation in Russia’s Amur gas and chemicals complex (Amur GCC), according to Russian petrochemical firm Sibur.

Sibur is working on the project in Russia’s far east jointly with China’s Sinopec.

It said it is now working with Sinopec on how to “adapt” the project to the new reality.

Linde secured the contract in 2020 to provide engineering, procurement and site services based on its proprietary technology for the cracker unit of the Amur plant.

The company said in March it was suspending all business development activities in Russia, ceasing supply to certain customers, and divesting industrial assets.

The Amur GCC is set for launch in 2024 and is expected to produce 2.3 million tonnes of polyethylene and 400,000 tonnes of polypropylene a year, processing gas fractions from Gazprom’s gas processing plant, which is also called Amur.

Linde had given a statement that it “condemns the invasion of Ukraine and is deeply concerned about the resulting humanitarian crisis”.

“In addition to the previously announced suspension of all business development activities in Russia, Linde is committed to scaling back its operations by ceasing supply to certain customers and divesting industrial assets to reduce its footprint in the country. These actions are taken responsibly, keeping in mind the safety of our Russian employees and local communities in which we operate. Consequently, we will continue to supply essential life-saving medical and other safety critical gases,” it said.