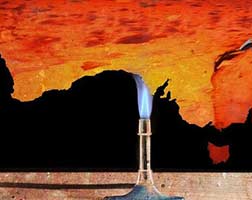 SYDNEY – While most of us were on holidays, something happened off the coast of Gladstone in Queensland that will have hip-pocket implications for consumers across the eastern states.

Granted, it sounds far removed from everyday life for most of us. But this cargo load is the start of a trend that will dramatically increase how much households pay for gas used for hot water, cooking, or heating.

It is predicted to push up many households’ utility bills by a similar amount to the carbon tax, but there are no plans for compensation. And as you’d expect with a jump in the cost of living of this size, this one is producing some seriously flimsy economics.

First though, back to that shipment. Not only was it the first time that CSG has been converted into LNG, the exportable form of gas. More importantly for consumers, it was the first time gas has been exported from the east coast of Australia at all, and there is much more to come.

Origin Energy and Santos this year also hope to start pumping cargo loads full of the stuff, to be sold to buyers across China, Japan, Korea, Malaysia and other Asian nations.

Economists are keeping an eye on these projects – and others in WA – as there are predictions they could make Australia the world’s biggest exporter of LNG by 2018, overtaking Qatar. LNG looks set to become our second biggest export behind iron ore.

But what will affect households directly is how this massive new industry transforms the domestic gas market.

Now that the east coast is able to export gas (WA has been doing it since 1989) producers have the option of selling to buyers in Asia, who are willing to pay much, much more for it than we have been.

Historically, the east coast gas market was insulated from the rest of the world, and the domestic wholesale price was stable at about US$3 to US $4 a gigajoule. Now, there are buyers across Asia prepared to pay US$12 or US$13, even when energy markets are in turmoil as they are at the moment.

That translates to much higher domestic prices. When you account for the costs of converting the gas into LNG and shipping, it still suggests a domestic gas price of $6 to $8 in the wholesale market. That is, a 100 % increase from the long-term average.

So far, the NSW regulator has approved a 17.8 % rise in retail gas prices between 2014 and 2016, partly in response to the new export boom.  Victorians face a similar jump over the next few years because its producers can also sell their gas to the north.

And these increases are just the beginning, with further significant price rises expected for the next few years.

As this extra cost is passed on to users, it will push up utility bills significantly. A report by the Grattan Institute’s Tony Wood last year estimated the average Melbourne household gas bill would jump US$300 a year because of the changes over the next few years, while the average Sydney bill would rise by more than US$100.

That compares with the extra US$270 a year that Treasury estimated we’d be spending on gas and electricity because of the carbon price.

Cost increases like this are understandably causing plenty of concerns for the more vulnerable consumers and affected businesses. Governments in NSW and Victoria are investigating the issue now.

And it is in this heated environment that business groups are mounting a campaign based on flawed economics.

In submissions to a NSW parliamentary inquiry, industry groups and AGL have repeatedly claimed that increasing the supply of gas in NSW would be one way to limit the impact of the gas price shock.

More specifically, they argue, the government should stop getting in the way of the industry’s plans to dramatically expand the extraction of coal seam gas, despite all the environmental and community concerns.

It’s economics 101, right? Lifting supply should push down the price. Except in this case, the claim is a furphy.

As the Independent Pricing and Regulatory Tribunal (IPART) says in its submission, the amount of coal seam gas being extracted in NSW has a minimal impact on what the state’s residents pay for gas. That price is now being set in the international market.

When you consider that NSW’s gas reserves only meet 5 % of its own needs, the state’s industry is clearly nowhere near the scale to affect global prices in any plausible scenario. To imply that it could is misleading.

The bottom line is that gas prices are set to soar because the long-sheltered domestic market is being linked to global prices via exports.

When utility bills are already such a sensitive issue, the industry does itself no favours making self-serving and misleading claims about how to these price pressures might be curbed.