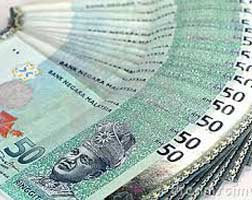 KUALA LUMPUR – Malaysia’s ringgit fell the most among Asian currencies as oil resumed a decline following a three-day gain.

The ringgit is Southeast Asia’s worst-performing currency in the past six months as the drop in Brent crude cuts earnings for the region’s only major oil exporter. The currency briefly trimmed losses after a report showed Malaysia’s factory output beat economists’ estimates in December. The nation’s Federal Court is due to announce sentencing today in the case of opposition leader Anwar Ibrahim’s appeal against a sodomy conviction, after it upheld a guilty verdict.

Brent has fallen 48 % since the end of June, prompting the government to revise to 2015 fiscal deficit target to 3.2 % of gross domestic product from three %.

Factory output rose 7.4 % in December from a year earlier, the government reported Tuesday. That was the most since July 2013 and more than the median estimate of economists in a survey for a 4.1 % advance. The central bank will release data on foreign-exchange reserves for the fortnight ended Jan. 30 later in the day.