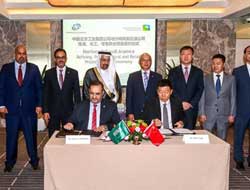 Saudi Arabian national petroleum and natural gas company, Saudi Aramco, has signed a deal with China North Industries Group Corp. (Norinco) and Panjin Xincheng Industrial Group for the construction of a refining and chemicals complex in northeast China.The goal of the project is to build a world-class refining and chemical integration base.

Saudi Energy Minister Khalid Al-Falih, who was in Beijing to participate in the Belt and Road Forum for International Cooperation, attended the ground-breaking ceremony where the deal was signed to build Saudi Aramco-Norinco Refining, Petrochemical and Retail project in Panjin.

Al-Judaimi said that there might be some challenges in the implementation of this project. “But I am confident that we will be able to overcome those issues taking into consideration Saudi Aramco’s proven record of project management skills and the strong commitment of all the stakeholders.”

The project will also enhance the competitiveness of Norinco’s petrochemical and value-added chemical divisions, and promote the overall economic revitalization in Liaoning and Panjin.