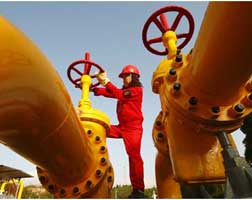 The National Development and Reform Commission and the National Energy Administration has made a joint announcement regarding China’s plan to expand its oil and natural gas pipeline networks over the next years as it moves to secure stable supplies and clean up the coal-dominated energy mix.

Pipelines for refined oil will reach all cities with a population of 1 million or above, while those with more than half a million residents will have access to pipelines for natural gas.

The oil and gas pipeline networks ensure steady energy flows from foreign sources to the country and from remote border areas to prosperous inland cities.

Given rapid economic expansion and an increasing population, China’s appetite for energy, especially cleaner fuels, is on a steady rise. Around 4.36 billion tons of standard coal-produced energy was consumed last year, up 1.4% year on year.

Energy imports from countries along the Belt and Road routes will be boosted with the construction of more pipelines. The plan highlighted projects with Russia, Myanmar, and Central Asian countries, and said more import projects will be initiated.

Although the use of coal is falling, it still accounted for more than 60% in the country’s energy structure. Steady supplies of oil and gas will help China wean off the reliance on dirtier coal.

China’s coal consumption dropped 4.7% from a year ago in 2016, while crude consumption grew 5.5% and natural gas consumption rose 8%.