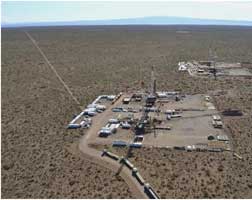 French energy firm Total SA will be investing US$500 million over the course of three to four years to develop a shale gas field in Argentina.

The energy giant has given the go-ahead to develop the first phase of the Aguada Pichana Este license in the Vaca Muerta formation. Total also plans to increase its interest in the license, co-owned by YPF SA, Wintershal Energia SA and Panamerica Energy LLC, to 41% from about 27%, pending approval from local authorities.

To spur drilling at Vaca Muerta, one of the largest shale formations outside North America, the Argentine government has extended a program that ensures a minimum price for the gas companies produce until 2021.

Total, already enjoying lower drilling costs following crude’s slump, has highlighted the need to get new projects off the ground to avoid a future shortfall in energy supply.

The announcement on Vaca Muerta marks the first of 10 large final investment decisions on new oil and gas ventures that Total plans for this year and next. The company is budgeting as much as US$17 billion a year in capital expenditure, including resource renewal, through 2020.