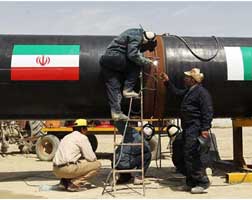 A negotiating team from Pakistan is set to visit Iran next month to hold discussions regarding the construction of the planned Iran-Pakistan (IP) gas pipeline which has been delayed for years due to US and Saudi opposition.

The delegation will have complete freedom to negotiate the volume, time and mode of gas imports from Iran and reach a final conclusion, according to an informed source.

Iran and Pakistan officially inaugurated the construction of the border part of the multi-billion-dollar gas pipeline project in March 2013.

The project kicked off in a ceremony attended by former Iranian President Mahmoud Ahmadinejad and his former Pakistani counterpart Asif Ali Zardari at the two countries’ shared border region in Iran’s Southeastern city of Chabahar.

The 2,700-kilometer long pipeline was to supply gas for Pakistan and India which are suffering a lack of energy sources, but India has evaded talks. In 2011, Iran and Pakistan declared they would finalize the agreement bilaterally if India continued to be absent in the meeting.

The IP pipeline is designed to help Pakistan overcome its growing energy needs at a time when the country of over 180 million people is grappling with serious energy shortages.

According to the project proposal, the pipeline begins from Iran’s Assalouyeh Energy Zone in the South and stretches over 1,100 kilometers through Iran. In Pakistan, it will pass through Baluchistan and Sindh but officials now say the route may be changed if China agrees to the project.