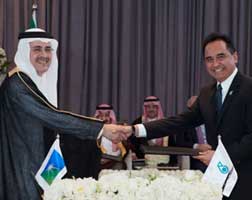 Saudi Aramco and Malaysian national petrochemical/gas firm Petronas have signed a share purchase agreement allowing Saudi Aramco to invest in equity in Petronas’s Refinery & Petrochemical Integrated Development (RAPID) project in the southern Malaysian state of Johor. Aramco will undertake a 50% stake in the refinery and cracker assets, with an investment of US$7 billion, making it the single largest investor in Malaysia.

Upon the completion of the transaction, subject to regulatory approvals and the completion of other associated agreements, both partners will hold equal ownership in selected ventures and assets of the RAPID project within the Pengerang Integrated Complex (PIC).

The RAPID project is part of the PIC development undertaken by Petronas and is positioned to be a regional downstream oil and gas industrial hub, paving a new frontier of technology and economic development in the Southeast Asia region.

This partnership marks the beginning of a strategic, mutually beneficial relationship providing RAPID with high-impact strengths and synergies from both Saudi Aramco and Petronas, said the companies in a jointly issued press statement.

Under the partnership, Aramco will supply up to 70% the crude feedstock requirements of the refinery, with natural gas, power and other utilities supplied by Petronas.

With capacity to refine 300,000 barrels of crude per day, RAPID’s refinery will produce a host of refined petroleum products, including gasoline and diesel which meets Euro 5 fuel specifications; as well as feedstock for its integrated petrochemical complex producing 3.5 million tonnes/year of products.

Situated 400 km south of Malaysia’s capital Kuala Lumpur, the PIC development is almost 60% complete and is on track for refinery start-up in 2019.

Apart from RAPID, which comprises the refinery, cracker and the downstream petrochemical complex, the PIC, located on a 6,242-acre site, also includes the development of associated facilities such as a co-generation plant, an LNG re-gasification terminal, a raw water supply project, a deep water terminal, as well as centralized and shared utility facilities.

The PIC forms part of Malaysia’s ambitious 22,000-acre Pengerang Integrated Petroleum Complex (PIPC) under the Government’s Economic Transformation Programme to establish new engines of growth and push the nation into a new frontier of technology and economic development in the oil and gas downstream sector.

The agreement puts to rest the news that has been floating around since last month on Aramco shelving a joint venture partnership in the project http://plasticsandrubberasia.com/jan2017/company4.html

Petronas had been seeking a joint venture partner for RAPID since last year http://plasticsandrubberasia.com/oct2016/company6.html

Aramco’s investment in Malay­sia’s Rapid project is expected to beef up its downstream portfolio ahead of its initial public offering (IPO) in 2018, which is purported to be the largest IPO in the world.