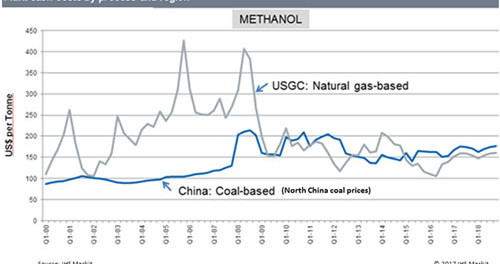 Rising Chinese chemical demand is expected to drive growth in the global methanol market, with the country using up as much as one in five tons of global methanol production by 2021 for methanol-to-olefins (MTO) production, according to new analysis from IHS Markit, a world leader in critical information, analytics and solutions.

A process that is seeing increased use in China, MTO produces olefins from methanol, a basic chemical used to produce fuels and other traditional chemicals.

In 2010, global methanol demand reached 49 million metric tons (MMT), but by 2021, according to the “IHS Markit World Analysis—Methanol 2017”, demand will surpass 95 MMT, with China boasting 54% of world capacity and 46% of global production.

“China has quickly become the dominant force in the global methanol market, and continues to be the focal point with its coal-based production setting the global market price,” said Mike Nash, global director of syngas chemicals at IHS Markit, and one of the authors of the IHS Markit World Analysis—Methanol 2017. “The impact of Chinese demand growth for methanol cannot be overstated, since we at IHS Markit forecast that Chinese demand growth is expected to increase very rapidly at around 7% per year, such that, by 2021, without additional Chinese capacity, net imports will double in volume from their 2016 level,” Nash said.

Chinese demand, Nash said, has grown significantly in traditional methanol derivatives, such as acetic acid and formaldehyde, the largest single methanol derivative and a key component for the production of construction and wood products, as well as high-strength engineering resins and a multitude of insecticide applications. However, newer end-uses such as light-olefins production and energy applications, such as direct blending into gasoline and the production of biodiesel and DME (dimethyl ether), are rapidly changing the methanol palette, the IHS Markit study said.

DME is used primarily as an aerosol propellant in the West, which represents a relatively small market overall, but its primary use is in fuel applications—where it is mainly blended into liquefied petroleum gas (LPG). This application is widely used by Chinese consumers for home cooking and heating, which has helped drive methanol consumption into DME from virtually nothing in 2000, to the fifth-largest methanol derivative in 2017, IHS Markit said.

China’s direct blending of methanol into the country’s gasoline pool is estimated at 7 MMT in 2017, and is estimated to grow to almost 10 MMT by 2026, as China seeks ways to supplement its gasoline pool. Growth in fuel production and gasoline blending now represents the second-largest methanol demand segment.

A newer and rapidly growing demand segment for methanol (exclusively in China) is in the production of light olefins using MTO technologies. In just four years, this end-use has driven staggering growth in methanol consumption and made MTO the second largest end-use for methanol globally.

“The production costs of methanol-from-coal in China and from natural gas in the US are not only competitive on a cash cost-of-production basis, but also even when we consider capital charges and a return on investment,” said Don Bari, vice president of IHS Markit, and co-author of the IHS Markit Process Economics Program (PEP) Methanol Process Summary March 2017. “That said, the relative (cash) cost or production positions are dependent on the cost of coal and natural gas. Coal-based technology in China had a clear advantage most of the last decade, before the impact of shale gas feedstock was felt in the US Then in 2008, the US natural gas route moved to the most competitive position, owing to a drop in gas price in the US as well as a rise in China feedstock, utility and fixed costs, on a US dollar basis,” Bari said.

Feedstock costs for methanol comprise as much as 90% of the total cash-cost and, as such, access to low-cost feedstocks is key to methanol economics. The primary feedstock for methanol has been natural gas, representing as much as 55% of installed global capacity. Regions with access to low-cost natural gas have seen a surge in methanol capacity additions, including North America, the Middle East, Africa and South America. With the growth in Chinese methanol demand and the country’s rich coal reserves, the industry has seen a sharp rise in coal-based methanol production.

Uncompetitive feedstock economics led to capacity rationalizations in North America and Europe in the early 2000s, with North American methanol capacity all but extinguished by 2008. However, recent exploitation of unconventional natural gas supplies in North America has allowed this region to regain its position as a methanol production powerhouse.

“US Gulf production economics, once the dominant driver of industry economics, are now beginning to exert significant influence once again as a significant number of new methanol units are being restarted, relocated or being built in the US Gulf Coast region,” Nash said. “Producers are taking advantage of the cheap and abundant supply of US shale gas.”

The sharp rise in North American production capacities and the cost position of these units has led to an increase in exports from the Americas that now ship product to both the European and Northeast Asian methanol markets. The expected growth in North American capacities will turn the region from a net importer to a net exporter during 2019, IHS Markit said.

Methanol pricing was always driven by supply and demand, but now that methanol has significant volumes of derivatives that compete as alternatives to crude-oil derived products, the picture becomes significantly more complicated, since affordability of some methanol derivatives becomes heavily dependent on crude oil-price fluctuations, Nash said.