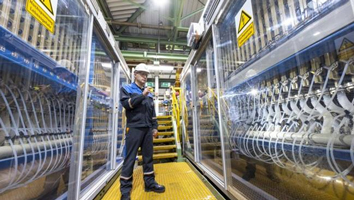 German chemical companies Covestro and Lanxess are cooperating in the energy-intensive production of basic chemicals at their Lower Rhine sites in Germany and make them more climate friendly. Lanxess procures chlorine, caustic soda and hydrogen from the ISCC PLUS-certified sites of Covestro in Leverkusen and Krefeld-Uerdingen. With immediate effect, Covestro is manufacturing around one-third of the volume of products it supplies to Lanxess using energy from hydropower based on guarantees of origin.

“Covestro is pursuing the goal of completely converting its production to electricity from renewable sources on its path to operational climate neutrality in 2035,” says Dr. Klaus Schäfer, Chief Technology Officer of Covestro. “A particular focus is on the energy-intensive production of basic raw materials. In cooperation with Lanxess, we use energy in our electrolysis plants in North Rhine-Westphalia on a pro-rata basis, which enables us to reduce our reported emissions by up to 120,000 metric tons of CO₂ per year.”

“The joint project with Covestro is an important building block in making our entire value chain climate-neutral. By sourcing raw materials for these products with a significantly reduced carbon footprint, we will be able to reduce our reported indirect emissions by up to 120,000 tonnes/year of CO₂ equivalents,” says Dr. Hubert Fink, member of the Lanxess Board of Management.

With its Net Zero Value Chain Initiative, the specialty chemicals group plans to eliminate Scope 3 emissions within its upstream and downstream supply chain by 2050. This includes indirect emissions, particularly from purchased raw materials, but also in logistics or disposal. For Scope 1 and 2 emissions, the company aims to be climate neutral as early as 2040. “With this program, we are taking the next step towards a climate-neutral product portfolio and also supporting our customers, who are increasingly looking for sustainable solutions,” says Fink.

Chlorine, caustic soda and hydrogen are basic building blocks for many products in the chemical industry. However, their production is very energy-intensive.

Lanxess uses the raw materials supplied by Covestro, for example, for products that are then used in the food and agricultural industries. Covestro produces the three basic raw materials at its North Rhine-Westphalian sites in Leverkusen, Krefeld-Uerdingen and Dormagen. Both the former have already been certified to the internationally recognised ISCC PLUS standard for the production of the strategic raw material chlorine, while this is also planned for Dormagen in the near future.

The correct allocation of the electricity to the products is ensured via this certification and the use of the renewable energy is proven by the invalidation of certificates of origin at the Federal Environment Agency. 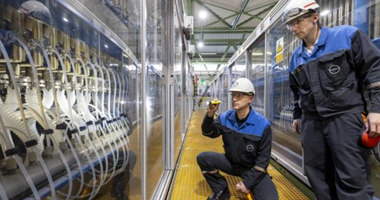 Covestro is also actively involved in various projects to build a hydrogen economy that uses mainly or exclusively green hydrogen as an energy carrier. Among other things, the company is supporting, in cooperation with Hydrogenious LOHC Technologies, to build the world’s largest plant for storing renewable hydrogen in liquid organic carriers in Dormagen, Germany.

With regard to its energy supply, Covestro focuses on power purchase agreements (PPAs) for renewable energy or high-level certificates. Only recently, the company signed PPAs with Chinese supplier CGN New Energy on wind and solar power that will cover around 30% of the electricity needs of its important production site in Shanghai. Under another, utility Ørsted will supply offshore wind energy starting in 2025, which is expected to meet 10% of the electricity needs of Covestro’s sites in Germany.