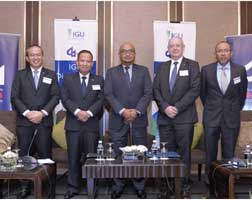 The Malaysian Gas Association (MGA) together with the International Gas Union (IGU) recently held the IGU Diplomatic Gas Forum. The event focused on the latest developments of the gas market in Malaysia, namely the market and regulatory reforms that were implemented when the Gas Supply (Amendment) Act 2016 took effect in 2017.

The Act enhances competition in the gas market by enabling the participation of third parties in the gas supply industry via the Third Party Access (TPA) system. Under the TPA, new gas suppliers can bring natural gas in liquefied form (LNG) into Malaysia via any of the two Regasification Terminals (RGT) and deliver gas to their buyers using the existing transmission and distribution pipelines.

The TPA would also allow large gas users to purchase their own supply of natural gas in LNG form from any source and utilise the regasification terminals and pipeline facilities to bring the fuel to their premises. This, in turn, is expected to boost competition efficiency and supply electricity as well as ensure the long-term security of the country’s gas supply.

In his welcoming remarks, the President of Malaysian Gas Association Hazli Sham Kassim, said: “Natural gas has always played a fundamental role in supporting Malaysia’s economic development. In the last 30 years, energy consumption has increased by six-folds, with half of that demand being powered by natural gas.”

“The credentials of natural gas as a cleaner, efficient and cost-effective fuel are indisputable. Abundant supply, competitively priced and being the cleanest fossil fuel make natural gas the best option to fuel the economy, whilst at the same time enabling countries to meettheir carbon emission commitments.”

In his keynote address, Vice President of International Gas Union (IGU), Dr. Joo-Myung – Kang said: “The energy transformation is already underway with natural gas complementing renewables. Climate change and poor air quality are not the problems of the next generation. This is a now, present and imminent dilemma we have to tackle. It is time for law-makers, policy-makers, central and provincial governments to provide better direction, enact enlightened policies and lead markets to respond for a sustainable future powered by gas.”

The case for natural gas

Natural gas make up 44 % of the total energy supply in the country. The benefits of using natural gas, instead of other energy sources such as coal, are many:

Luis Bertrán, Secretary General, IGU said the market reforms introduced in Malaysia follows similar reforms in Europe, Mexico and Egypt. The natural gas sector in Europe used to be highly centralised, which led to inefficiencies and unreasonably high prices. The natural gas liberalisation efforts have provided competition and transparency, bringing to the end-consumer a secure and sustainable supply at the least cost. The liberalisation tools implemented in Europe include free entry and investment, the right to use infrastructures and the hiring of independent regulators.

The Diplomatic Gas Forum is a series of forums organised by IGU in several major cities around the world, including Washington, Stockholm and Madrid. The forum hosted by MGA, as a charter member of IGU, was the first IGU Diplomatic Gas Forum to be held in South East Asia.