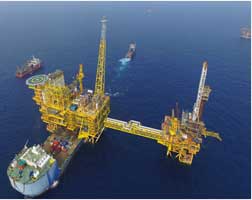 Petroliam Nasional Berhad (Petronas), a Malaysia state-owned oil and gas company, has begun the sale process of its large minority stake in an upstream local gas project for up to US$1 billion to cut on development costs and raise cash, according to two sources familiar with the matter.

Petronas is looking to sell a stake of as much as 49% in the SK316 offshore gas block in Malaysia’s Sarawak state, the sources said, a move that would be among its first major recent sales as it grapples with oil prices that have slumped by half over two-and-a-half years.

That drop in oil prices has squeezed the cash flows of Petronas, hurt its earnings, and forced it a year ago to announce a RM50 billion(US$11.2 billion) cut in capital expenditure over four years.

The company is now working with an investment bank on the SK316 gas block stake sale and kicked off the process this month, one of the sources said. Petronas is currently gauging interest from potential buyers, said the sources, who declined to be identified as they were not authorized to speak about the matter.

The sources said the stake is expected to include a combination of the producing NC3 gas field, the potential development of the Kasawari field in the same block and other exploration acreage in the block.

The funds raised could contribute to the future development of the Kasawari field, one of the largest non-associated gas fields in Malaysia, which has an estimated recoverable hydrocarbon resource of about three trillion standard cubic feet.

Petronas put on hold plans to develop the field in 2015 after oil and gas prices fell, according to media reports.

The stake could appeal to firms such as Indonesia’s state-owned Pertamina, Thailand’s PTT Exploration and Production and some Japanese companies, the sources said.They said it might also appeal to the Kuwait Foreign Petroleum Exploration Company, which snapped up Royal Dutch Shell’s stake in Thailand’s Bongkot gas field for US$900 million last month.

As huge production comes online in Australia and the United States, LNG markets are oversupplied, resulting in an almost 70% slump in Asian spot LNG prices since 2014.Despite this, Malaysia’s LNG assets are viewed as attractive thanks to comparatively low production costs and due to their proximity to North Asia’s big consumption hubs of Japan, China, and South Korea.